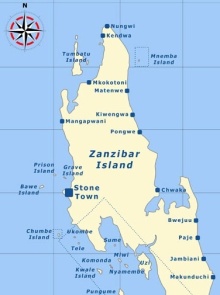 Paje on the East, Nungwi at the Northern Tip

Towards the end of our stay on the lovely Zanzibar Island, Lasse and I rented a couple of dirt bikes so we could tour the island a little. Both of us wanted to go to the northern tip of the island and visit Nungwi. This was supposed to be the part of the island where most tourists visited and stayed. Talking to the local ‘hustler’ by our hotel, we managed to book two dirt bikes for $25 a piece for the following day. These were Honda 250’s, so we should be able to have a little fun on them. I had been missing the two wheel life since leaving home.

Testing the Bike out on the Beach 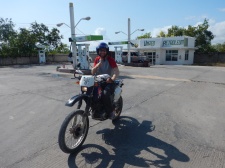 Lasse All Fueled Up and Ready to Roll

Picking up our dirt bikes just after 8:30, we were off to a good start to see the rest of the island. Since there wasn’t a lot of fuel in the bikes we made a little pit stop to give them some gas. It was roughly an hour ride to the northern tip of the island from where we were. This seemed simple enough since Zanzibar doesn’t have many roads and Lasse had a map on his phone. Little did we know it was going to be quite an adventurous day!

Some Great Scenery While Riding

We hit our first police stop about 15 minutes into the journey. So much for police officers being nice and friendly. Since we were seen as tourists, police saw us as having money and looking for a bribe. Spending about 10 minutes at the first police stop arguing with the police officer about our documents all being correct was a nightmare. In Tanzania to drive a motorcycle it is a Class A license, but in the States you just get endorsed for it. This was an issue he had with our licenses because they did not have a Class A on them. We stood firm and of coarse our license and temporary permit were all correct. Eventually he let us go when he realized we weren’t going to pay him any money.

Riding along the roads was very enjoyable and the scenery was beautiful. It was a little weird getting used to driving on the other side of the road but with it being a pretty straight shot without many turns both Lasse and I didn’t have any issues. About 35 minutes into our ride, dark clouds came over us and it started to rain. Pulling off the road under a tree, we waited out some of the rain and then decided to keep on going. A few more police stops later along with the hassling and haggling that came with them we made it to Nungwi!

Local Fishing Boats in One of the Nungwi Bays

Pulling into one of the beaches there, we parked the bikes and walked around a little bit. There were a few small shops here so we poked our head in and looked to see what they had to offer. Lasse wanted a shirt so we ended up finding him one. Seeing as there were no restaurants here where we stopped it was decided to go further down the road and find some food. We jumped on the bikes and as I went to kick start mine, the kick starter broke off. This was great and unlike Lasse’s bike mine didn’t have an electric start. I thought we were going to be stuck here an hour away from our hotel. Fortunately, one of the locals noticed our problem and we pushed the bike to a mechanic down the road.

Working to get the Bike All Fixed

All Fixed Ready to Go

After staring at the part and me trying to explain what needed to be to be done, the mechanic got to work with his welder. Now the kick start couldn’t just be welded back on because it was the little part that the kick start arm swiveled on that broke off. Spending about an hour and a half, the mechanic was able to weld up from scratch a piece that would work. Paying him $15 we were good to go again!

Riding down the road some we found the main part of Nungwi with all of the tourist shops and restaurants. Our stomachs had been yelling at us for the past hour so we parked the bikes and found a lovely restaurant that served brick oven pizza and ordered a couple. Boy was it good pizza and filling as well. The next order of business was to walk around and check out the beaches here. 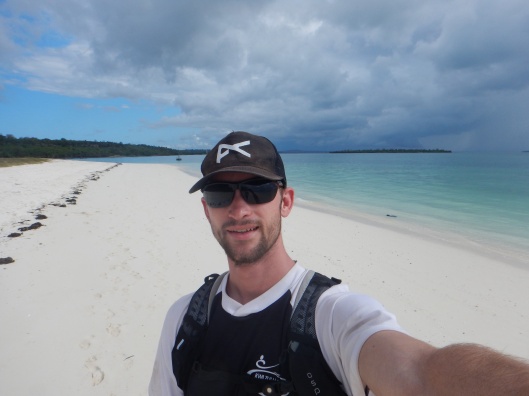 White sand beaches and some great views couldn’t beat it!! Hotels lined the beaches as well as some shops. There were definitely more tourists here and the hotels themselves were bigger as well. This side of the island had more of a resort type of feel. Nonetheless we enjoyed spending another day on the beach with great weather.

Sun Setting on the Ride Home

Riding back to Paje, we passed through some more police stops. Luckily for us we didn’t have too many more problems getting through and talking to the officers. Unfortunately, I decided to turn off my bike at one of the stops and when I started it the kick starter broke again! This was turning out to be a crazy day dealing with police and a broken motorcycle. It was starting to get late and the sun was slowly going down so we didn’t have too much time to figure out this problem. After letting the bike cool down a little and a few tries push starting the thing, we finally got it turned over and were on our way. The sunset over trees while we were driving was beautiful and brought a smile to my face. Looking down at the odometer on the other hand not so much because I was getting dangerously low on fuel. I couldn’t refill my bike because that would require turning it off and going through the whole process of starting it again. I decided to risk it and pray that we would make it back without running out of gas. Lasse however put in a little more in his bike and we were off on the home stretch to the hotel. There had already been some crazy things to deal with today and we didn’t need anything else to happen before getting back to the hotel.

Sunset Over the Palm Trees

Just as it was getting dark we pulled into the hotel. We had made it! Somehow my bike made it on the remaining gas which I was very happy about. We explained to the guys we rented the bikes from everything that happened and I returned the broken kickstart that I had kept in my backpack. What a crazy, eventful, and fun day this had been! It was so cool to tour the island on two motorcycles even with all the adventures that came with it. It will be a day that I won’t ever forget.