It was a struggle fest as I rolled over on the bench and tried to wake up Saturday morning. Catching the ferry at midnight from Northern Ireland and arriving into Douglas at 3am was rough. A couple hours of uneasy sleep as the ferry crashed against some large waves coupled with a few restless hours on a bench in the sea terminal, it was going to be a long day. Robbie was picking me up at 9am, which gave me just enough time to drink some coffee and eat some breakfast before getting all packed up.

Stopped to see the Laxey Wheel

Starting the ride with a good group of guys

I had never met Robbie before and he was a friend of one of the people I messaged for a place to stay. Without my phone working, he managed to find me waiting outside and we hit it off as we drove to meet a couple of other friends for a mountain bike ride up to the mountain pass to watch the beginning of the TT race. Approaching the mountain pass, boy was it windy! I don’t mean like mildly windy but the sort of wind that blows you over and tosses you sideways like a paper bag. It was for this reason, the races were postponed. With no races going on, our supposed to be short mountain bike ride turned into a good three hour trek through the hills. It was nice to ride again through dirt with an unloaded bicycle even though I went over the handlebars after being blown sideways on a small drop (guess I need to start working on my technical riding skills again). 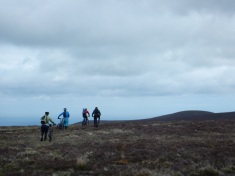 Some Riding Some Hiking

After the ride, Robbie invited me back to his place for some much needed food. It’s my crutch, I love food and couldn’t resist the offer. That night I was planning on camping, but Robbie and his brother Rod graciously offered me a bed. Such great hosts! Sunday morning I woke up and headed to church with Robbie and then to a braai. It was so nice connecting and talking with people, being able to hang out and be engrossed to the lifestyle on the Isle of Man. That night, we headed to Glenmaye to do a little bit of jumping off the waterfalls. A fun filled and packed day!

That water though…oh so cold! 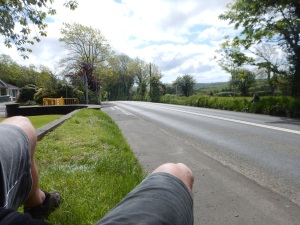 My Spot Near Crosby

Monday came and I headed down the road to catch the TT races. The sidecars were going today and boy were they flying by. It was incredible to watch as I sat right on the side of the road not even five feet from some of them. After the races, I headed back to the house and packed up because it was time for me to move on and stay with Helen and Ben who had offered to host me for two nights. Robbie and Rod were great and I had such a blast hanging out with them, very generous and I am forever grateful for the roof they put over my head as well as showing me a good time! 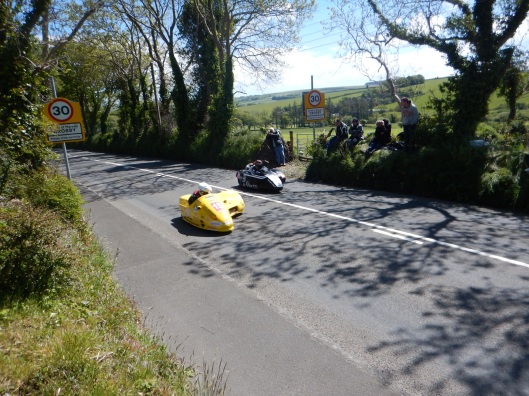 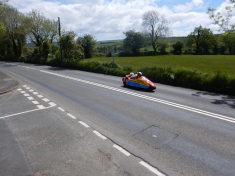 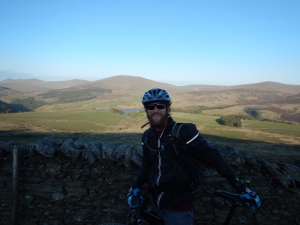 Made it to the Top

I had two nights with Helen and Ben, as I would catch the ferry at the unfortunate time of midnight on Wednesday. After arriving and meeting Helen and Ben just after 6pm, we loaded up the bikes and were off to enjoy a mountain bike ride. Climbing to the top of the hill, my legs were burning but the view and decent were well worth it. Ben had to get back home, so Helen and I continued on enjoying the ride before pedaling back home.

With more races going on, I headed up the street from the house and watched at Quarter Bridge. A great view as the riders were coming into the corner and then speeding away. I was loving the experience. That night I met up with Ben, his son Cory, and Helen at the fair. We all hung out and I even got to enjoy a crazy bumper car ride as Cory was learning how to drive. 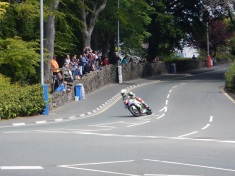 …and flooring it away 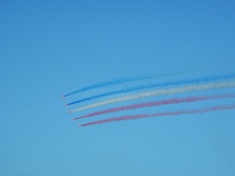 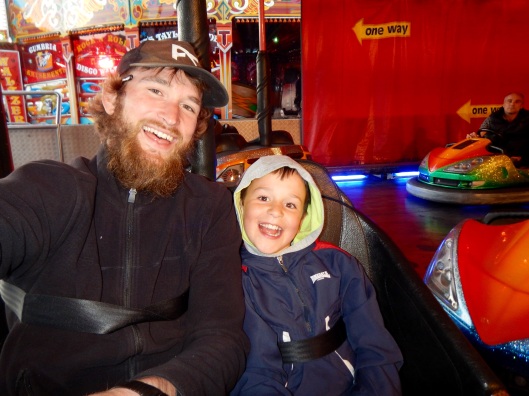 Things are about to get crazy with Cory!

My last day came on the Isle of Man as I rode up to Creg-ny-Baa for some more intense racing. Finding a spot right on the hedge after the corner, bikes would fly by within arms length. It was a great day for racing with the sun shining brightly. After the bikes finished, I headed to the section before the corner to watch the sidecars fly down the hill before braking hard and making the turn. Since my ferry wasn’t til late, I met back up with Ben and Helen who graciously took me for a scenic drive around the island. It was a beautiful drive with great landscape and we even stopped for some delicious chips, cheese, and gravy in Peel to watch the sunset. 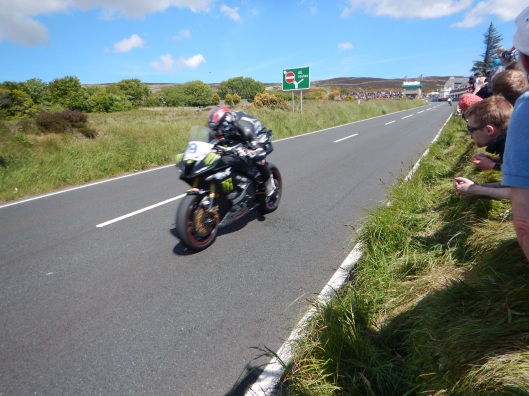 Arms Length Away and Wizzing By! 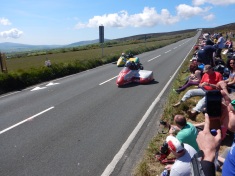 Neck and neck heading into the corner 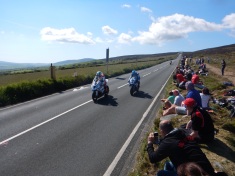 Racing around during the qualifying lap

The Passenger is Insane!

Traveling and seeing places is great, but the people I have met along the way have helped make the trip so much more meaningful and enjoyable. I can’t believe all of the generosity I have been blessed with. The friendships I made during my stay on the Isle of Man I’ll remember forever and have definitely helped and uplifted me as I had been feeling a bit lonely. So, thank you Robbie, Rod, Helen, and Ben for not only offering me accommodation but showing me a wonderful time with some lasting memories! Even met John McGuinness.

2 thoughts on “Isle of Man TT”