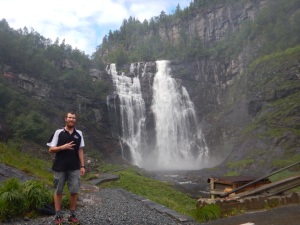 Leaving Lote, I caught the ferry to Kvanndal and after some delicious fish and chips was on my way. The goal: to make it to Voss for the night. With the weather looking great it shouldn’t be an issue. Along the way, I stopped to admire the views as well as enjoy Skjervsfossen Waterfall. It was fun heading through the many tunnels in Norway that allowed bicycles. They were unlike any tunnels I’ve experienced in the states, just a hole through the rock without a concrete ceiling. Arriving into Voss, I was taken back by the view from the porch. It is by far the nicest view from any hostel I have stayed in so far. A big tour group was staying the night there, so it was fun talking and making some new friends from different parts of the globe. 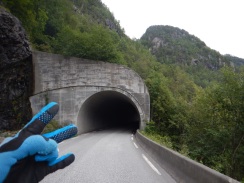 Through tunnels I ride!

These tunnels are so cool

Just…WOW. Back porch of the hostel

In the morning, a delicious Norwegian breakfast was to be consumed consisting of eggs, bread, jam, cereal, fresh fruit, meat, cheese, and various fish spreads. I was hoping to get a decent early morning start for the Rallarvegen but plans changed when I started talking to a fellow cycle tourist. We had a great conversation about our travels and experiences and two hours later I was on my way. It was all uphill from here…literally. More on the Rallarvegen HERE.

Trudging through the snow 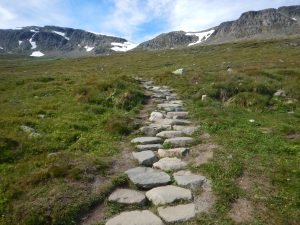 After finishing the Rallarvegen and arriving into Geilo, I found the hostel and booked two nights where I enjoyed my own dorm room and could spread out all of my gear. The following day was supposed to be rainy but ended up the exact opposite, nice and sunny. This gave me time to make the 10km(6mi) uphill climb to the Prestholtseter Trailhead. A great little hike to the top took roughly 30 minutes where the views extended over Geilo and the Hardangarvidda. The stairs for this trail were laid down by Nepalese Sherpas.

On the way back to Geilo, I found some singletrack to ride. Boy was this a blast! It had been a long time since I have ridden some good single track without a loaded bike and reminded me why I love bikes so much. Definitely brought a huge smile to my face!

Back at the hostel, I discovered a steam room which my muscles thoroughly enjoyed. With rain forecasted the following day, it was time to take the day to relax and catch up on the blog.

After taking the day off, I was refreshed and ready to go again. In the morning at breakfast, I found out about a short little ride that was being put on by the hostel and two German girls that were volunteering there. Since I have no set schedule, I decided to join in for part of the ride before heading off into the Hardangarvidda. It was a great ride and enjoyable being able to ride with some other people. As they headed back to Geilo, I turned off and followed the climb up to Tuva Hut on the Hardangarvidda (one of Europe’s largest mountain plateaus). 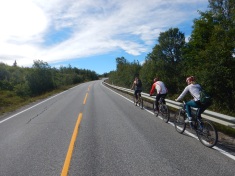 Another climb after a tough dirt road climb

Through the woods and around the lake

Climbing up onto the Hardangarvidda and Tuva Hut

From Tuva Hut, I joined the hiking trail and proceeded to ride 60% and walk 40% of the 15km (9mi) to Heinseter Hut. It was really rocky and muddy but quite enjoyable! With some daylight hours left, The push towards Åan Hut began. This was a disaster and was all hike a bike as the trail was narrow, rocky, and overgrown with shrubs. My legs got destroyed from all of the small branches but eventually a good camping spot was found. 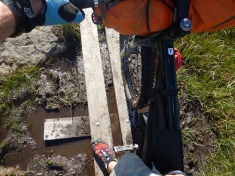 These helped avoid some mud

Awesome View of the Plateau

Some mud just can’t be avoided

Great views from the office

After a decent nights sleep where my sleeping pad continually deflated, the remaining two hour hike began. I was tired of hiking through this terrain and happy to finally be riding again along a dirt road. Connecting back up with National Route 5, I followed it into Kongsberg where I met Bartek, Emila (his wife), and Jan (their son) who were going to host me for the night. They were extremely welcoming and I enjoyed a nice shower, delicious dinner, and washed clothes. Jan and I had a lot of fun playing together even though we had a language barrier. A great family and fantastic hosts! Thank you! 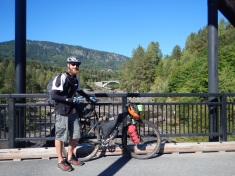