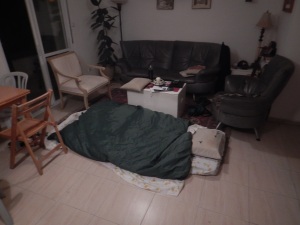 What a great place to visit! Getting a good deal on airfare because of my cousin helped make this trip possible. It was a spur of the moment decision to spend Easter in the Holy City of Jerusalem. I booked my ticket on Wednesday and Thursday the plane left to Tel Aviv. After arriving, I grabbed a shared taxi to Jerusalem where I would be staying with a good family friend. Bill was more than happy to have me even on such late noticed. This I appreciated a ton and was able to catch up with him throughout my stay. Since he already had two other guests occupying the spare room, I crashed on the floor which I didn’t mind one bit. 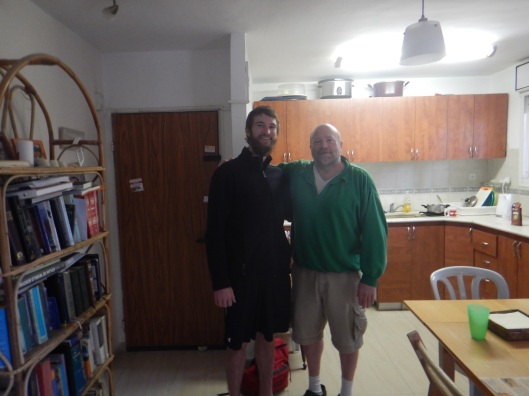 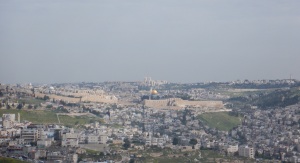 The Old City from the Promenade

Waking up Friday morning, I walked along the promenade to the Old City. With it being good Friday, there was a lot going on in the city. Throughout the day groups were walking Via Dolorosa which has stations set up for Jesus’s walk to Calvary. What an experience this was! Walking the streets where Jesus walked and going through his story that very day, was indescribable. That night I headed to a messianic church for an excellent Good Friday service. I learned a lot that night as it really connected the dots between the Jewish celebration of the Passover in Exodus and the crucifixion of Jesus. This is a rare occurrence that the start of Passover and Good Friday actually fall on the same day. 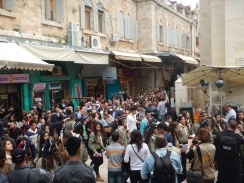 Saturday morning, which is also the Sabbath, I headed back to the same church. It was a cool experience to have the message in both Hebrew and English. The two guys, Ron and Aaragon, that were staying with Bill during this time also went and gave me a ride. They were really nice and we ended up hanging out the rest of the day viewing the several sights of the Old City. That night, Ron’s daughter Hannah got us free tickets into the light show at the Tower of David. I couldn’t believe how good this show was with the history of Jerusalem being displayed 180 degrees across the ruins. It was definitely one of my favorites. 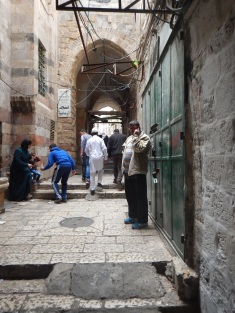 Western Cardo from the Roman-Byzantine Period

Getting Ready for the Light Show

Waking up before the sun on Easter Sunday, Ron, Aaragon, and I headed to the garden tomb. A sunrise service was going on which we just couldn’t miss. So many people from all over the world were present and celebrating the resurrection of Christ. It was incredible. Heading to the Old City, we had a tour scheduled for the Western Wall Tunnel. While taking the tour, you were right next to the entire western wall of the Temple. The enormous size of some of the Herodian stones were just breath taking. Imagining the amount of work it took to build this wall, is unfathomable. To finish of the day, we headed back to the Tower of David which contained the whole history of Jerusalem from the beginning to present day. Looking out over the Old City from the top of the tower, was a favorite of mine. 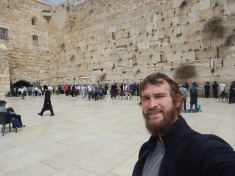 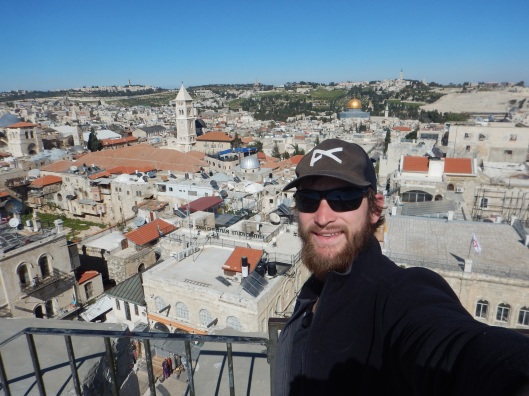 The City from the top of the Tower 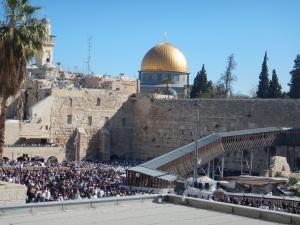 Ron and Aaragon were very friendly and ended up letting me join into their trip. I was very thankful for this and Monday we tried to head to the Temple Institute where the Jews are preparing for the third temple. We had the location wrong and ended up going behind the Western Wall to view the Dome of the Rock. While heading up the ramp to go behind the Western Wall, the whole complex was filled with Jews and tourists as the Priestly Blessing was being given. It was said that at least 50,000 people were present. After viewing this spectacular event, we went to the Israel Museum. The museum was filled with art, the history of Israel, fashions of various other countries and exhibits to keep one occupied for a couple days. My favorite part though was viewing the Dead Sea Scrolls! 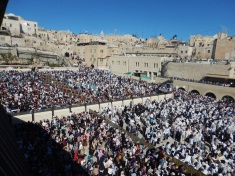 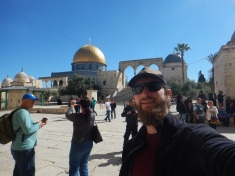 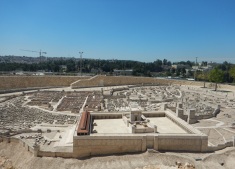 Waking up while it was still dark out, 4am, Aaragon, Ron, and I made the drive south to Masada. As the sun was rising, we were half way up the Masada Snake Path and were able to enjoy view as it came up over the Dead Sea. We walked around the ruins on top which was first one of Herod’s Palaces and then a stronghold for a group of Jewish rebels that fought against the Romans. Leaving Masada, it was time to float in the Dead Sea! This was an experience I can’t even describe but it was so fun and cool! To finish off our long day, we headed to the Qsar al-Yahud Baptismal Site where Jesus was baptized by John the Baptist in the Jordan. 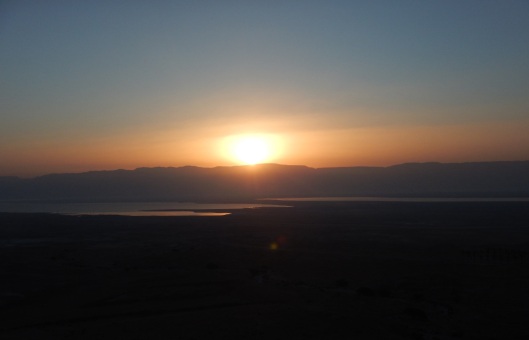 Sunrise Over the Dead Sea

Siege Ramp to the Bottom Right

In the Jordan Around Where Jesus was Baptized 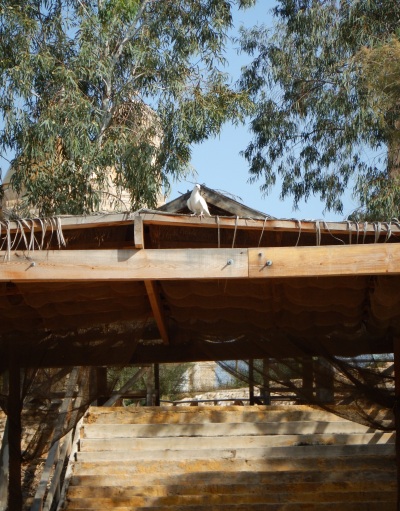 Dove Appeared at the Baptismal Site

With such a long day yesterday, Wednesday we ended up sleeping in and relaxing. Late morning, all three of us headed to the Caves of Adullam. Exploring the hills and various different caves was a fun time. This was one of the areas where David hid from Saul. We ate a snack on top of one of the hills looking out over land below enjoying the nice sunny day.

Two full days remained of my stay in Israel and Ron and Aaragon were nice enough to take me up north to the Sea of Galilee. Picking up Hannah we were on our way! Stopping by the Yardenit Baptismal Site, we were able to view the other site where John the Baptist was said to be. We arrived at the Sea of Galilee and enjoyed a great drive around the lake while stopping at some different sights, one of which was Capernaum. That night we camped on the edge of the Sea of Galilee and because of some tent issues ended up sleeping outside underneath the stars. This wasn’t a problem except for the fact that so many people were there camping as well. Loud music played throughout the night and trash was scattered everywhere. 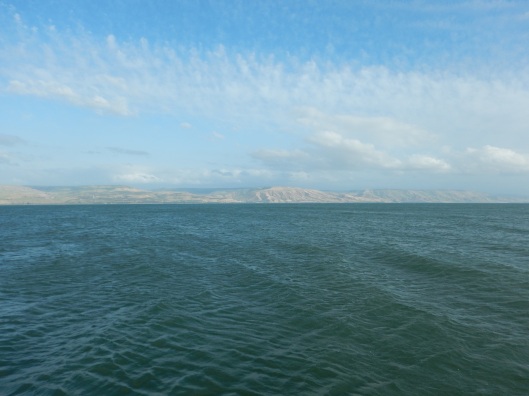 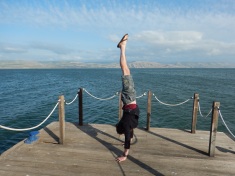 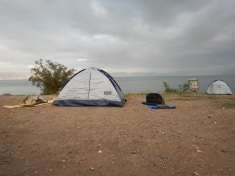 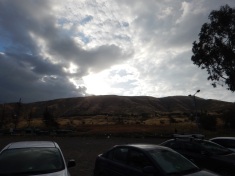 Sunrise Over the Hills 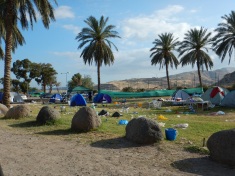 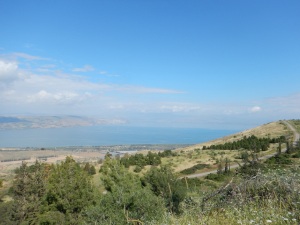 Heading up into the Golan Heights the next day, we are able to see across into Syria. Along the side of the road was also a Syrian tank that had been captured and destroyed. The drive through the Golan Heights was beautiful and making it to Majdal Shams, we met a very nice old Druze man that was selling honey. Inviting us into his house for some coffee, we spent the next 45 minutes talking and hanging out with him. This was really nice and I enjoyed meeting and learning about one of the locals. After we ate a delicious lunch in the Druze Village, it was time to start the drive back to Jerusalem. Stopping in Haifa along the way, we could look into the harbor there in the Eastern Mediterranean Sea. 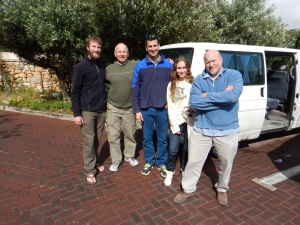 Me, Ron, Aaragon, Hannah, and Bill

My last day in Israel came and in the morning we all headed to a messianic church service. I really enjoyed it with everything being given in Hebrew and English. Afterwards, Bill took us to the King of the Schnitzel and boy was it good! This trip was a blast and definitely eye opening. I couldn’t believe everything that I was able to see and do. I was able to make some new friends during this trip, Aaragon, Ron, and Hannah and am truly grateful for their generosity and showing me around Israel. It was because of them that I was able to see and do so much. Bill was great as well and it was so good to talk and catch up with him. Offering his place to stay for over a week was very kind and he even gave me a ride to the airport. Boarding the plane, I met my cousin Dave who was the Senior First Officer for the trip and I was on my way to London. 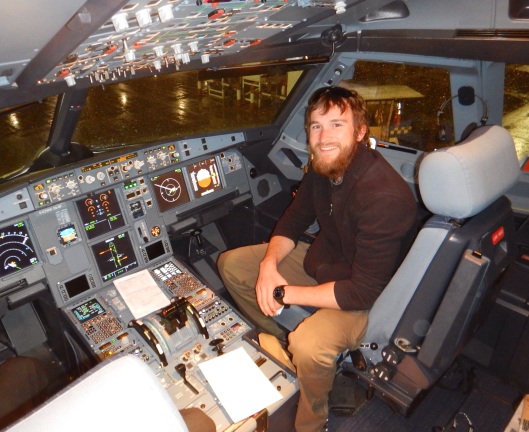