This was a 14km (8.5mi) hike making a loop along the Strathaird Peninsula. Lasting 6 hours, the climbs were mild and short and the views along the coast were fantastic. It was supposed to be a really windy, rainy, bleak day with scattered thunderstorms but instead we ended up having great weather. With the occasional rains and winds blowing through, the sun ended up shining for a lot of the hike.

Starting the hike inland through a grassy field, light rain began to fall. It quickly cleared up as we approached an area where an old railroad line used to be. Following this path, we came to the old rock quarry and the view of the rolling hills. Cresting one of the hills, the lost city of Boreraig appeared and so did the coast line. This was a perfect spot for a little break to explore the ruins of theses one bedroom houses.

Rolling Hills Coming to the Ocean 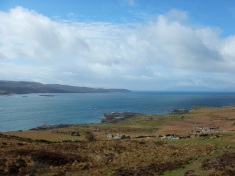 Coming Upon Boreraig and the Coast 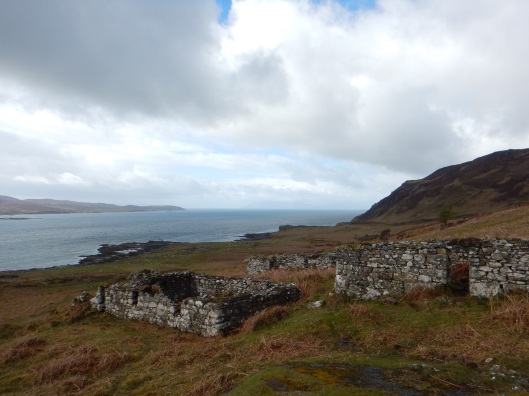 Up until now, the path had been more of an off-road trail but at Boreraig it turned into single track. Working its way along the coast up and down, it was worth the time to stop and take in the scenery. Just as we were getting hungry and ready for some food, it started raining. Luckily by the time we got to the shelter we were going to eat at, it had ceased. 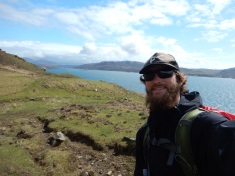 All fueled up, we were ready to carry on with the hike. Leaving the single track behind, we connected up with a dirt road. The rain continued to come and go occasionally but not enough to take away the enjoyment of this wonderful hike. Before we knew it, it was time to leave the coast and walk the asphalt back to the van. With the Scottish weather holding up good during the day and a whole ton better than forecasted, this was a great all day hike on the Isle of Skye. 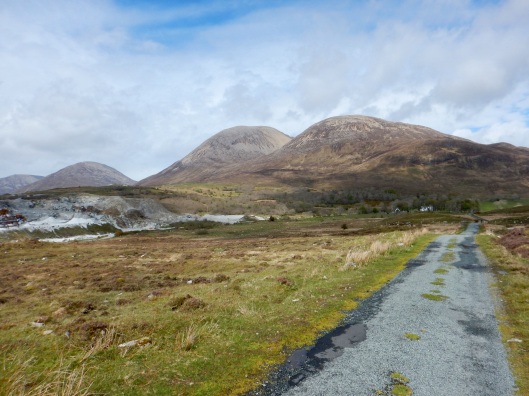 Back to the Van